My Miis Wiki
Register
Don't have an account?
Sign In
Advertisement
in: Female Miis, Female CPU Miis, Miis,
and 29 more

Not to be confused with Botty.

She is not a PRO in any sports but does not play Boxing. However, her skills in Tennis is high as a non-PRO, and she is very good there. However, she is extremely awful in Baseball, being placed between Elisa and Emma in skill level. If the player is against Elisa, then Botan will serve as a ball catcher if you are a batter. She also plays on all teams of Emma and Misaki in Baseball.

Her skills in Table Tennis and Cycling are quite high even though she is not a PRO in these sports (excluding Cycling). She is awful in Swordplay and is below-average in Basketball as a team captain.

She is very good in Tennis, at Level 9, but is quite horrible in Boxing at only Level 1. She only appears as a teammate in Baseball, regardless of team leader's level.

She is a Beginner Mii.

Wii U and 3DS appearance: 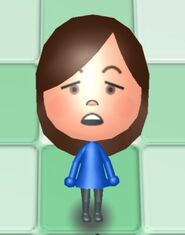 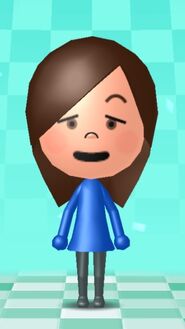 3DS and Wii U version as a Brawler

Wii version as a Gunner.

Botan the pitcher in Baseball.

In Baseball as a batter.

Two Botan/Allison clones as Brawler and Gunner in SSBU victory

Wii U/3DS Botan/Audrey as a Mii Gunner in Maid Outfit.

Ditto, but for Wii U, Switch and 3DS appearances as Allison

Child Botan as a swimming referee

Teenage Botan as a swimming referee

Community content is available under CC-BY-SA unless otherwise noted.