My Miis Wiki
Register
Don't have an account?
Sign In
Advertisement
in: Female Miis, Female CPU Miis, Miis,
and 18 more

In Tennis, her skill level is 1500 and it's PRO skill level. She teams up with Carl or Mario.

In Swordplay, her skill level is 1200. She is also the boss of Level 49 in Swordplay Showdown.

Her skill level in Basketball is 3218 and her team is Jack and beef boss.

In Wii Party, her skill is Advanced Master.

In Wii Party U, her skill is also Advanced Master.

In Wii Music, she has a different hairstyle and eyebrows and her favorite color is Yellow. Her name is Millie. She also plays the ukulele.

Christina in Wii Music, as Millie.

Christina as a Zombie in Wii Party. 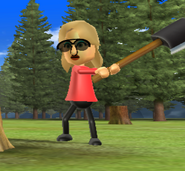