Curtis is a Mii that debuted in Wii Sports. He is ranked #10 out of Dadpleaseno's Miis.

In baseball, he is bad with a skil level of -1.

In basketball, he teams with himself and has a skill level of 2. 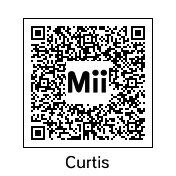