My Miis Wiki
Register
Don't have an account?
Sign In
Advertisement
in: Miis, Mat-mat's Miis, Female Miis,
and 22 more

Dorothy (known as Katsura for Japanese releases) is a Mii in Wii Sports (Resort), Wii Party, Wii Sports Club and Party U.

She is a PRO in Tennis and Baseball.

She is OK in Swordplay. On the other hand. very bad in Basketball. Lastly, she is quite challenging in Table Tennis and Cycling, even though she is not a PRO there.

While she not a PRO in Baseball, she is nevertheless OK there, as her grade there is Level 7. There is a very rare chance that she can perform splitters.

She is in the Advanced difficulty.

She is in the Advanced difficulty.

Ditto, as a Child. 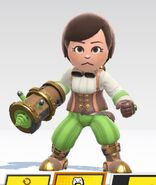 Dorothy as a Mii Gunner in Steampunk Getup outfit.

Dorothy about to perform "Omega Blitz" final smash on Lucía

Dorothy as an opponent in Baseball

Dorothy as a CPU in the other lane in Bowling.

Dorothy in Nintendo Switch Miitopia (credit to 3Bebo3 for the creation)

Dorothy and Hinata hit by Ursula'a special up kick.

Dorothy rising up after being hurt.l and then lying on the ground.

Dorothy with a grin.

Dorothy about to perform the Omega Blitz final smash.

Okuda Nao attacking Dorothy while Chinatsu and Sasha stand by and watch.

Until Chinatsu cannot take it anymore.

A dizzy Dorothy after running out of shield energy as a result of a heavy attack.

Dorothy in the last place