Dundundun is a mii from Wii Sports Resort. He is ranked #69 out of Dadpleaseno's Miis.

His skill in basketball is 3024 and he teams with someone and someone. 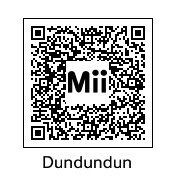