Ella is a CPU Mii.

In Basketball, Ella's skill level is 2533 and plays with Johnny and Chris-Abe. In Table Tennis her level is 2323. Her level in Swordplay Duel and Speed Slice is 3028.

In Wii Party, Ella is one of the three Champion Miis in single-player mode. In multiplayer mode, she is an Advanced Master Mii.

Fanart of Ella facing Kienan in a Baseball game. 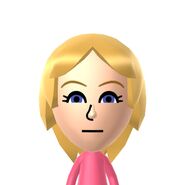 Ella as she appears on the Wii U. 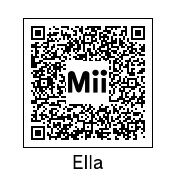 Wii Sports The Next Generation- Playthrough Part 2
Ella in Wii Sports: The Next Generation
Add a photo to this gallery
Retrieved from "https://my-miis.fandom.com/wiki/Ella?oldid=48848"
Community content is available under CC-BY-SA unless otherwise noted.