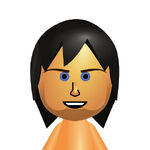 In Baseball, his skill is somewhere in the 300 mark. In Tennis, he is a Super Star Pro at level 5621. He playes with Mackenzie or Rotta in Tennis. In Boxing, he very bad at level -465,431. He can only KO you when he punches you 33 million times.

Fung-shong is an Expert CPU in Wii Party.

Retrieved from "https://my-miis.fandom.com/wiki/Fung-shong?oldid=20388"
Community content is available under CC-BY-SA unless otherwise noted.