In Tennis, Grasshoper's level is 35 and doubles with Abby, Misami, or Wario. In Baseball, his level is -106--21 and has a team of himself, Misami, Malte, Chicken, Kenny G, Miss, Adam, Fatso, and Elisa. He appears on Huck Finn's, Vince's, Ika's, and Mug Wump's teams as a teammate. You only face against him if you lose four or more consecutive games and your level is below -25. In Boxing his level is 601-728.

In Swordplay, Grasshoper's level is 2413. In Basketball, his level is 9428 and plays with Kienan and someone. In Table Tennis his level is 11368. 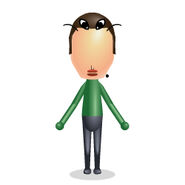 A recreation of Grasshoper using the Mii Maker.
Add a photo to this gallery
Retrieved from "https://my-miis.fandom.com/wiki/Grasshoper?oldid=39656"
Community content is available under CC-BY-SA unless otherwise noted.