My Miis Wiki
Register
Don't have an account?
Sign In
Advertisement
in: Mii, Miis, Black Outfit Miis,
and 8 more

Not to be confused with Jimmy or Jimmy Neutron.

Jimmy Carter is a Mii from Wii Sports Resort and the 39th president of the United States. He is ranked #75 out of Dadpleaseno's Miis.

39th president of the US

In Wii Party, Jimmy Carter is an Advanced Master Mii. 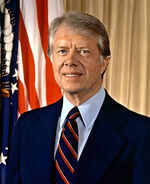