Judson is a CPU Mii.

In Tennis, Judson is a Super Star Pro, with a level of 3700. He doubles with Plank or Luigi. In Baseball, he is the first champion and his level is 986-1194 (Sometimes PRO) and plays with Hiroshi, Rin, Emily, Sarah, Billy, Saburo, Theo, and Shouta. He appears on the teams of Shinnosuke, Takumi, Angus, Pierre, Steve, Helen, Maria, and Mich. If your skill level is 1000 or over, you will continue to face him until you beat him. He is the pitcher in Baseball training. In Boxing his level is 7778-7942. 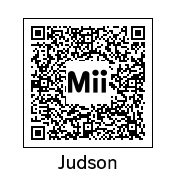 Judson's QR code.
Add a photo to this gallery
Retrieved from "https://my-miis.fandom.com/wiki/Judson?oldid=38248"
Community content is available under CC-BY-SA unless otherwise noted.