My Miis Wiki
Register
Don't have an account?
Sign In
Advertisement
in: Miis, CPU Miis, Female Miis,
and 12 more

This article is about the CPU Mii. For the by Kate the youtuber, see Kate (Wii/Wii U).

Kate is a CPU Mii.

In Tennis her level is 5050 and plays with Zelda or Santa.

In Baseball her level is 9945 to 10063. She is one of the few opponents to use the underhand pitch. She appears on the teams of Derek and others.

In Basketball, her level is 2563 and plays with Maddie and Johnny.

Kate also appears as an opponent in Wii Sports Club.

In Baseball, she is mediocre at level 7.

In Wii Party, Kate is an Advanced Master CPU.

In New Wii Party U, Kate is a Master Mii.

Wii Sports: The Next Generation

Kate's skill in Tennis is 1900 and doubles with Coraline; they are the Champions of Tennis.

In Boxing she is the champion, and her skill is 1550 to 1649. You unlock the Silver Gloves after defeating her.

Wii Sports Resort: The Next Generation

Her skill in Basketball is 1496 to 1500, and she is the Champion. Her teammates are Scott the Woz and Mario.

She is your coach in Cycling, giving you advice.

Kate as she appears on the Wii U. 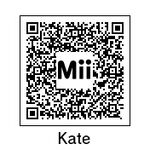 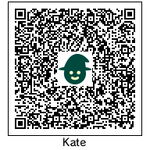 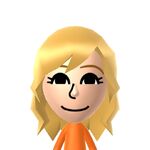 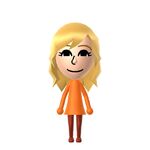 Another photo of Kate as she appears on the Wii U. 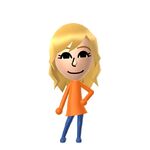 Kate as a tank in Miitopia.

Another picture of Kate in Miitopia.

Kate on the cover of New Wii Party U.
Community content is available under CC-BY-SA unless otherwise noted.
Advertisement