Not to be confused with Luigi (Mario Sports)

Luigi is a CPU Mii.

In Tennis, his skill level is 3600. He teams up with Mario or Theopoulos. In Baseball, his skill level is 1712-1854 and his team is Nathaniel Bandy, Zelda, Christina, Akira 2, Nate, Albert, Nic, and Cathy. He plays on the teams of Addy, Enrique, Mikey, Jimmy Neutron, Halifaxo, SMG4, Peter, and Dudy dude. In Boxing, his level is 2000.

In Wii Party, he is an Advanced Master CPU.

In Wii Party U, he is also an Advanced Master CPU. 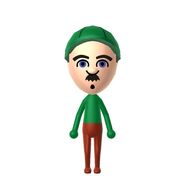 An alternate version of Luigi. 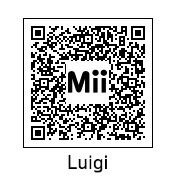 Luigi as he appears in the Super Mario series.
Add a photo to this gallery
Retrieved from "https://my-miis.fandom.com/wiki/Luigi?oldid=43626"
Community content is available under CC-BY-SA unless otherwise noted.