My Miis Wiki
Register
Don't have an account?
Sign In
Advertisement
in: Semi-protected articles, Canon Miis, Miis,
and 11 more

This Mii is canon. That means this Mii actually exists in the Wii Sports/Wii Sports Resort/Wii Sports Club/Wii Fit/Wii Party/Wii Music games. However some of the information is fanon.

Not to be confused with Matt (TWD98), Matt (Dadpleaseno), or Matthew.

Matt is a CPU Mii from Wii Sports, Wii Sports Resort, and Wii Party. Despite being somewhat widely considered to be the best Mii, he is only ranked #53 out of the Wii Sports Resort CPUs, by overall skill level. His Total Skill Level is 4,537.

In Wii Sports, Matt acts as your trainer in Boxing for all of the training sessions, as well as the champion in Boxing and a competitor in Tennis and Baseball. In Tennis, he has a very low skill level (48-50), as he appears in the very first match when the player starts. His partner is often Miyu. If you lose the first match in Tennis, Matt's partner will be Miyu again or Abby. In Baseball, he is one of the first 9 players having a team of himself, Akira, Luca, Emma, Elisa, Kentaro, Abby, Jessie, and Silke. Matt plays on every Baseball team from Elisa to Chris. Despite being a champion in Boxing, Matt is one of the worst Miis in Baseball, with a level of 98-259. In Boxing, he is the champion with a level of 1550-1649.

In Wii Sports Resort, Matt acts as the referee in Speed Slice, and if you are playing against him, Ryan takes his spot. He is also a competitor in Basketball and he plays with Fritz and George, but isn't good, with his level being only 446+. He is also the Champion in Swordplay Duel and Speed Slice and is ruthless. In Swordplay Duel, Matt is equipped with a Purple Sword and you fight against him in the evening. After defeating him, and when you face him again, Matt uses a red sword and can be played against in the daytime. In Showdown mode, he only appears in the final level, where he is the boss. He will be ultimately defensive and strikes ultimately often, and almost never gives you a chance to hit him. He is surrounded by 3-hearted fighters like Eduardo, Mike, Chris, and George, sometimes Rin, Tommy, Hiroshi, and/or Gwen will surround him. It is best if you get to Matt with 3 hearts or defeat him while you are fighting Eduardo. He is not a Pro in Table Tennis, but he is still good. His skill is 776+. He is not great at Cycling, coming 77th out of 98.

In Baseball, his team is the same, but he appears on Eduardo 2's team and not on Chris's. He also appears on the teams of Kenny G, Miss, Adam, and Fatso.

In Wii Party, Matt is a Master Mii. 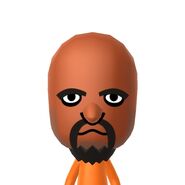 An unofficial recreation of Matt by IAmAwesome2.