Not to be confused with Meg, Megan, or Megen.

Meggy is a CPU Mii.

In Tennis, Meggy is good with a level of 7000. In Baseball, Meggy is very good. Her level is 103014! She plays with Michael Tutori and others. She plays on the teams of Carl Wheezer, Greg Heffley, Northwest, Jocelynn, Bathaniel Nandy, Jack, Ariella, and Jon. In Boxing, Meggy's level is 7813-7956. 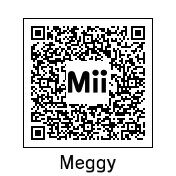 Meggy in Mario Kart 8.
Add a photo to this gallery
Retrieved from "https://my-miis.fandom.com/wiki/Meggy?oldid=44892"
Community content is available under CC-BY-SA unless otherwise noted.