After winning challenge after challenge, Xerneas was the dominant force of the game. The 3 Yveltal members in the merge did little to change the game, and Jaslyn won for her balanced game over Cole's social game and Fumiko's lack of gameplay in a 8-1-0 vote.

At an Emmy award show, Brian and the 18 WA Miis were announced as the cast. All 19 Miis helped build camp, and on Day 3, the Miis appointed a leader picked the two tribes, and was sent to Exile Island. Ted was appointed leader, and the Xerneas tribe had Brian, Carrie, Cole, Dwayne, Eri, Gavin, Haru, Jaslyn, and Percy. The Yveltal tribe had Abby, Akira, Ava, Fumiko, Hotaka, Laura, Owen, Titan, and Tiara. Xerneas won immunity, plus a luxury camp all 19 contestants built, while Yveltal was directed to a new camp with weak supplies. Hotaka was too strategized too early and voted out. Owen played an idol, and Titan was voted out for forming a secret alliance with Abby. Owen's actions haunted him, and at the very next TC, he was voted out. After an intense argument, Tiara was voted out. After Xerneas gave up immunity for their luxury camp, Dwayne was the lowest-ranking member of Xerneas after Gavin persuaded him everyone to vote him off. Akira isolated himself again, and was voted out.

At a schoolyard tribe swap, Jaslyn was unpicked and exiled, and the new Xerneas had Brian, Fumiko, Percy, Abby, Haru, and Gavin, while the new Yveltal had Laura, Cole, Ted, Eri, Carrie, and Ava. Ted's bossiness led to his demise, then Eri was unanimously voted out for being a threat to win. Then Ava for her alliance with Haru.

At the merge, the Xerneas camp was stripped of its luxury. Gavin was voted out, due to him being a huge threat. Haru was then voted out for being athletic, and Carrie was idoled out for her strategic nature. Immunity and social threat Brian was voted out after Cole betrayed him. Percy was voted out then, after he was too bossy. Then, annoying threat Abby was near-unanimously voted out. Then, previous winner Laura was on the outs and voted out.

At Final Tribal Council, Fumiko got no votes for her lack of gameplay and coattailling. Cole was praised for making it far despite being second out in S1 and his social game, but was criticized for lack of strategic game. Jaslyn ultimately won for balancing social game with physical game and strategy.

At the reunion, Eri was fan favorite, with Gavin and Cole as the runners-up. The hot seats went to Cole, Dwayne, Jaslyn, Brian, Carrie, and Laura. Cole discussed going from 17th to 2nd, Dwayne and Fumiko announced they were now married, Jaslyn discussed making Day 39 twice, Brian discussed being the sole newcomer, Carrie discussed being "sunnier" in this season, and Laura discussed the haves and have-nots. 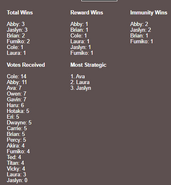 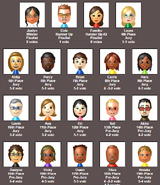 Placements.
Community content is available under CC-BY-SA unless otherwise noted.