Though the white collars had control in the beginning, their dysfunction led to their demise, as a core alliance of post-swap Nagarote led by white-collar Carrie split into 2. They were kicked off one-by one late into the merge, with the Final 3 consisting of 2 blue collars and 1 white collar. Ultimately, Laura won the game for many reasons over Gavin ( and Jaslyn in a 4-3-1 vote.

The eighteen new castaways were divided into three tribes of six based on social class: Escameca (Blue Collar), Masaya (White Collar), and Nagarote (No Collar). Each one chose a representative, while the rep chose someone they felt was on the wrong team. Ava formed a secret alliance with Haru to prepare for the tribe swap, which irritated Haru's alliance member Carrie as well as her Nagarote tribemates who found out, and led to her demise, and the alliance dissolved. Nagarote and Escameca had a rough start, losing 2 members, and a core alliance of Cole, Laura, and Gavin dissolved on Escameca. First, Laura and Abby got caufh strategizing, an Abby was deemed a bigger social threat. Gavin seemed like the one to go when they lost again, but he pers them to vote Cole for being useless to align with. Akira was isolated from Nagarote, and everyone was annoyed by his behavior. At a tribe swap, Escameca was dissolved, and the new Masaya had Eri, Fumiko, Haru, Laura, Owen, Percy, and Tiara, while the new Nagarote had Carrie, Dwayne, Gavin, Hotaka, Jaslyn, Ted, and Titan. Eri, with only 1 ally, Fumiko, was indirectly isolated and less useful in challenges (Fumiko is an athlete) and voted out. Masaya won immunity again, and Owen's idol was exposed, but the new Nagarote members disliked Fumiko's laziness at camp, and the vote went to deadlock. Tiara was eliminated.

At the merge, Percy was at the bottom, and although Ted played and idol, Percy still had more votes. At the next tribal Council, Fumiko got out for her unlikability. A core alliance split due to Carrie, the leader's bossiness and insensitivity towards Titan's ASD, and Jaslyn, Hotaka, and Titan formed a new one. Haru, due to her past as a basketball player was seen as a threat and voted off. After an idol play, Titan was voted off for his challenge threat and alleged "sob story", followed by Ted, another threat. Carrie dissolved another alliance, this time with "close" ally Dwayne as well as Gavin. Desperate, Carrie tried to form one with Laura, but she saw through it. Owen was out for his awkwardness. Followed by Hotaka, who lost a revote to Carrie, as he said she was a potential "goat" to take to FTC, offending her.

The final 5 was Carrie, Jaslyn, Dwayne, Laura, and Gavin. 5th place was Carrie due to Gavin successfully stating she was a threat, because of her ability to form new alliances. Dwayne made a Final 3 deal with Laura and Jaslyn, but Jaslyn realized she could not win against Dwayne for his challenge ability and likability, and left the alliance, much to Dwayne's chagrin.

At Final Tribal Council, Jaslyn was berated for coattail riding and only Dwayne voted for her for their friendship, Gavin was praised for his strategic ability and making it far despite his old age, but criticized for his arrogance. Laura was praised for her challenge ability, likeability, and unique, but effective answers, but was criticized for getting too emotional or clueless at times. Laura ultimately won against Gavin and Jaslyn in a 4-3-1 vote

At the reunion, the contestants discussed their experiences on the show, with a "hot seat" going to 5 castaways, Titan, Eri, Gavin, Hotaka, and Carrie. First, Titan won the fan favorite award with Gavin as the runner-up, and Eri as the second runner up, due to his story, cause, personality, and desire to win without a "sob story", and he discussed his ASD struggles and how thankful he was to be on the show, and everyone contributed to the discussion. Eri learned despite her early elimination, she turned out to be a favorite because of her unique ways of strategy, cheerfulness, and camp games she came up with. She was surprised, but thankful, and Fumiko reassured her she wasn't surprised, as Eri was different, a strong player, free-spirited, and fun. Gavin discussed making it far despite being 69 and an early target, and was impressed he placed second. Hotaka learned how persistent he was, and was liked for never giving up. Finally, Carrie, a villain rewatched some of her worst moments, and tearfully apologized to Titan, Haru, and Hotaka, and admitted Hotaka was right in saying she was a goat without a chance of winning. She said she was a terrible person, but Hotaka reassured her it was the game that got to her. 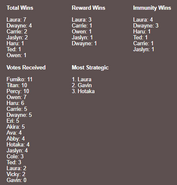