My Miis Wiki
Register
Don't have an account?
Sign In
Advertisement
in: Miis, CPU Miis, Female Miis,
and 10 more

This Mii is canon. That means this Mii actually exists in the Wii Sports/Wii Sports Resort/Wii Sports Club games.

Misaki (pronounced "MEE-SA-KYEE") is a CPU Mii from Wii Sports, Wii Sports Resort, and Wii Party. She is ranked #27 out of the Wii Sports Resort CPUs, by overall skill level. Her Total Skill Level is 4,518.75.

Misaki is not a Pro in any sport in Wii Sports. In Tennis, her level is 610-640, making her decent at the sport. She plays with James or Steve. In Baseball, she is mediocre. Her skill is 198-367 and she has a team with herself, Silke, Jessie, Abby, Kentaro, Matt, Akira, Luca, and Emma. She plays on the Baseball teams of Fumiko, Martin, Chris, Oscar, Mike, Jake, James, and Marco. She doesn't play Boxing.

In Wii Party, Misaki is an Advanced Mii. 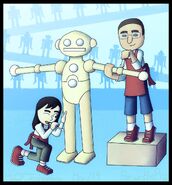