My Miis Wiki
Register
Don't have an account?
Sign In
Advertisement
in: Canon Miis, Miis, Expert CPU,
and 18 more

This Mii is canon. That means this Mii actually exists in the Wii Sports/Wii Sports Resort/Wii Sports Club/Wii Fit/Wii Party/Wii Music games. However some of the information is fanon.
For a Wii Sports Wiki official page of Mizuho, here is this page.

Mizuho (pronounced "MEE-ZOO-HO") is a CPU Mii from Wii Sports Club and Wii Party U. Her Total Skill Level is 245. She is ranked #15 in rankings.

As for her child self, she is a Beginner PRO in Tennis, at ☆1, but is decent in Baseball, at Level 5. However, she is terrible in Boxing, as she is just Level 1 there. Overall, unlike her current self, her child self's skill Level has been downgraded.

In Wii Party U, Mizuho (both current and Child self) is in Expert Difficulty.

No contest screen featuring Mizuho and her friends.

Mizuho as a swimming referee. 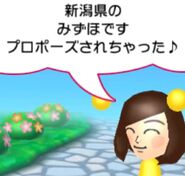 Mizuho in the last place.

Mizuho as a Mii Swordfighter in Ashley Outfit.

Mizuho about to perform the Final Edge final Smash.

Mizuho in a chef outfit in Recipe Recall.

Mizuho in Feed Mii! in Wii Party U.

Facial expressions as a Child.
Community content is available under CC-BY-SA unless otherwise noted.
Advertisement