My Miis Wiki
Register
Don't have an account?
Sign In
Advertisement
in: Miis, Male Miis, CPU Miis,
and 3 more

Not to be confused with Bathaniel Nandy.

Nathaniel Bandy is a CPU Mii.

In Basketball, his level is 2953 and plays with Ariana and Paskom. In Table Tennis, his level is 5443. In Swordplay Duel and Speed Slice, Nathaniel Bandy's level is 7498.

Wii Sports: The Next Generation

Wii Sports Resort: The Next Generation 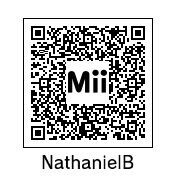