My Miis Wiki
Register
Don't have an account?
Sign In
Advertisement
in: Male Miis, Male CPU Miis, Miis,
and 9 more

SMG4 is a Mii that debuted in Wii Sports.

An alternate version of SMG4.

SMG4 when he finds a good meme. 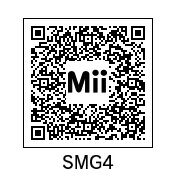