Not to be confused with Shigeru (Wii Sports).

Shigeru Miyamoto is a Mii.

His Table tennis skill is the same as his Tennis skill, at 9999 skill points. In basketball, He has a skill of 31223, and he plays with Reggie and Alexander Hamilton. In swordplay, he is good, with a skill of 1111111. 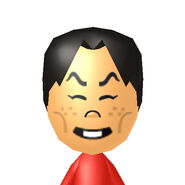 Miyamoto on the 3DS. 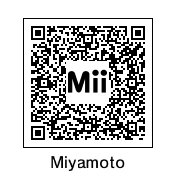 Miyamoto's QR Code.
Add a photo to this gallery
Retrieved from "https://my-miis.fandom.com/wiki/Shigeru_Miyamoto?oldid=42447"
Community content is available under CC-BY-SA unless otherwise noted.