Not to be confused with the canon character of the same name.

She has a burnt sienna-brown bob-cut hair (default option hair with reverse bangs) with brown eyes, short height, fair skin, blushes, side-smiling mouth and a small reverse U-shaped nose. (Her Wii U and 3DS counterpart is essentially the same, but is vertically compressed, as does with her eyes by one stage, and with a faint pink shade of flesh (right below the default skin color in Wii U or Switch), similar to sunburn pink or Malibu peach).

She is a PRO in Tennis, scoring from 1000 up to 1050, making her one of the first Tennis PROs to be encountered. However, her skill is quite horrible in Baseball, starting with the 0 skill up to 75. She will be a first CPU to encounter for new players whenever they lose against Elisa. The chances of encountering her upon being defeated by Elisa will be moderate to high. Whenever you lose against her, Kenny G will be your opponent. If you beat him, you will get to Ursula once again (the odds of such an occurrence depending on your skills earned), and then Elisa or higher (if you win against her. Again, that possibility depends on how many skills you earned). She does not perform splitters but only fastballs and curveballs in Baseball, making her a very easy enemy to fight against for beginners. She is also awful in Boxing, too, at only 90 to 200 in skill.

She is generally terrible in Swordplay, only scoring from 107 to 185. She is okay with Basketball and Cycling (even as a non-PRO in that sport), being 488-495 and 55th out of 98th place, respectively. She is very good in Table Tennis as a PRO, scoring from 1050 to 1080. There, she can be seen using a hotel slipper as a table tennis racket. While she is very awful in Swordplay, do not let your guard down as she will strike you unnoticed, especially when you are not too experienced.

She is very good as a Pro in Tennis and Baseball at Level ★6 and ★7 respectively, but is downright terrible in Boxing, (granted, she is a Beginner for new female players) at Level 1. She is the worst female opponent in Boxing. When a female Mii player is in the Boxing for the first time, she will fight against Ursula. On the other hand, new male Miis will fight against Matt (Ursula will be their opponent after they lose against Matt and is possible to encounter after they completed their fight against him.) She is one of the worst CPUs in Boxing. In Tennis, after you beat Susie, there is a high chance you will encounter Ursula as a next-level enemy.

As for her sleepy alter-ego, she is very bad in all sports, all of them at Level 1.

She is a Standard Mii.

She is a Beginner Mii. (Absolute Beginner for her sleepy alter-ego) 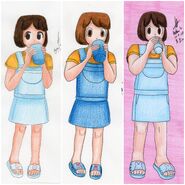 Ditto, but both as Swordfighters 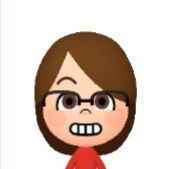 Nancy, her older sister lookalike exclusive to Wii U and 3DS.

Ursula and Nana as Red Team

Formerly with Lip Outfit in her debut

An angry Ursula and Dorothy.

Ditto but as Wii version

Ursula as a CPU bowler in other lanes in Wii Sports Bowling. 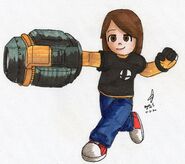 Ursula in Maid Outfit performing an UP taunt.

Ursula in Nintendo Switch Miitopia (credit to 3Bebo3 for the creation)

Yet another facial expression, but this time with eyes not modified in any way except the design being chosen.

Ursula as a swimming referee.

Ursula in a Kindergarten Getup outfit as a Mii Switdfighter. 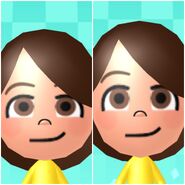 Third place as a Mii Swordfighter.

Ursula being 4x bigger in a 2x size player match.

Ursula with Sneg and Volna. 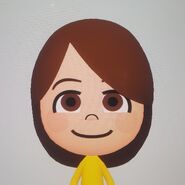 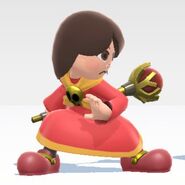 Ursula the Mii Gunner about to hit Samus with a Baseball bat. 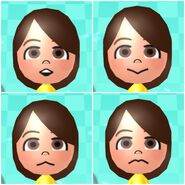 Ursula with a Toy-Con visor.
Community content is available under CC-BY-SA unless otherwise noted.
Advertisement