So, sooner or later, I will be making and releasing a comics series, which is a spoof of Big Brother, Welcome to the House. 13 teenage contestants compete to win $1M, in 10 episodes. Each episode, someone is eliminated, until the Final 3 remain, and the jury of contestants (10th place-4th place) will vote on who deserves to win. In the future, a video on the characters will be released. 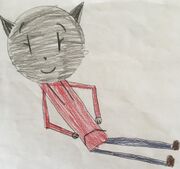 Wolf (15) (Toronto, Canada) (The Introvert)
Add a photo to this gallery

What are your thoughts on the concept of Welcome to the House, and the characters? What are your predictions for the comic? Let me know in the comments below!

Retrieved from "https://my-miis.fandom.com/wiki/User_blog:YoungArtist79/My_Series-_Welcome_to_the_House?oldid=40368"
Community content is available under CC-BY-SA unless otherwise noted.