My Miis Wiki
Register
Don't have an account?
Sign In
Advertisement
in: Male Miis, Miis, Male CPU Miis,
and 8 more

zxzxbeard is a Mii from Wii Sports. He is ranked #15 out of Dadpleaseno's Miis.

In Wii Sports, zxzxbeard is amazing. In tennis, his skill level is 8 billion, and he doesn't need a partner to absolutely destroy you. In baseball, he has a skill level of 9.8 million and he always hits Home Runs and Out of the Parks. In boxing, his glare from those cold, dead eyes can knock you out. His skill level is 7.9 trillion.

In Wii Sports Resort, he keeps his amazing skill levels. In basketball, his skill level is 6.9 million. He can jump so high that it's impossible to block him. He never misses a shot. He doesn't need teammates to win. In swordplay, he doesn't even block and you still can't hit him. His skill level is 5.6 billion. In Table Tennis, he has a skill level of 8.8 trillion and hits the ball faster than the speed of light.

In Wii Party, he is an Advanced Master Mii.

A picture of zxzxbeard in Mario Kart Wii.

zxzxbeard being congratulated for winning the Lightning Cup in Mario Kart Wii. 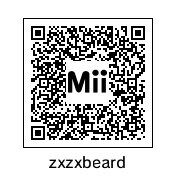 zxzxbeard about to play Swordplay Showdown.
Community content is available under CC-BY-SA unless otherwise noted.
Advertisement